Medical staff administering monkeypox tests at Ichilov Hospital in Tel Aviv have requested access to the vaccine against the virus from the Health Ministry, after a doctor was infected earlier in the week while handling a sample, Hebrew media reported on Thursday.

The doctor was wearing full protective gear while testing patients and was likely exposed to the virus while removing his gloves according to an epidemiological investigation, the Kan public broadcaster reported.

Dr. Roy Zucker, a specialist in infectious diseases and head of LGBTQ medicine at the Clalit health fund, told the Kan public broadcaster that medical staff should be immunized against monkeypox.

Doctors checking for monkeypox come into close contact with possibly infected patients. However, Health Ministry guidelines determine the highest priority for the vaccine should be men who have the HIV virus or other sexually transmitted diseases, and those who engage in sexual relations with other men, the group most at-risk of catching the virus.

Kan reported that the Health Ministry is now considering expanding the availability of the shots.

According to the latest data from the Health Ministry, 160 people have been diagnosed with the virus in Israel since the beginning of the outbreak in May, while the World Health Organization has reported over 25,800 confirmed cases across 70 non-endemic countries. 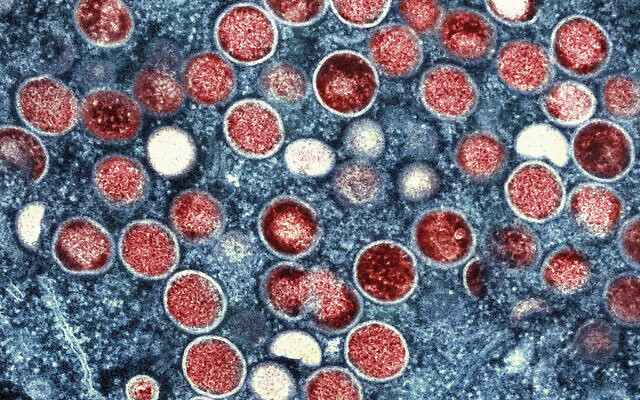 This image provided by the National Institute of Allergy and Infectious Diseases (NIAID) shows a colorized transmission electron micrograph of monkeypox particles (red) found within an infected cell (blue), cultured in the laboratory at the NIAID Integrated Research Facility (IRF) in Fort Detrick, Maryland. (NIAID via AP)

Monkeypox is characterized by a rash that can look like pimples or blisters, from which the virus can be transmitted, normally through skin-to-skin contact.

The WHO declared the recent outbreak of the virus a global health emergency in July, labeling it an “extraordinary event.”

Supporting The Times of Israel isn’t a transaction for an online service, like subscribing to Netflix. The ToI Community is for people like you who care about a common good: ensuring that balanced, responsible coverage of Israel continues to be available to millions across the world, for free.

Sure, we’ll remove all ads from your page and you’ll gain access to some amazing Community-only content. But your support gives you something more profound than that: the pride of joining something that really matters.

Join the Times of Israel Community

We’re really pleased that you’ve read X Times of Israel articles in the past month.

That’s why we started the Times of Israel ten years ago – to provide discerning readers like you with must-read coverage of Israel and the Jewish world.

So now we have a request. Unlike other news outlets, we haven’t put up a paywall. But as the journalism we do is costly, we invite readers for whom The Times of Israel has become important to help support our work by joining The Times of Israel Community.

For as little as $6 a month you can help support our quality journalism while enjoying The Times of Israel AD-FREEas well as accessing exclusive content available only to Times of Israel Community members.

thank you,
David Horovitz, Founding Editor of The Times of Israel